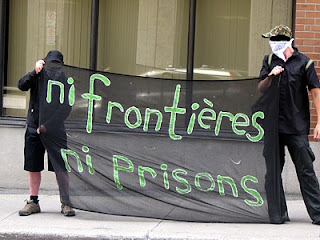 Montreal, July 8: For the second time this week, people in Montreal acted in solidarity with the historic hunger strike presently continuing in prisons across the state of California.

While Montreal media have so far made no mention of the hunger strike, on Friday July 8, a small crowd gathered outside the u.s. consulate to express their outrage at the California prison system, and their support for the prisoners on hunger strike. People chanted “From Guantanamo to Pelican Bay, There’s Blood on the Hands of the USA”, and “2-3-4-5, No Prisoner Has To Die, 5-6-7-8 Show Support, Smash the State”. A speaker from the newly formed Montreal Hungerstrike Support Committee informed passersby about the prisoners situation, calling particular attention to the fact that Pelican Bay doctor Michael Sayre has ordered that strikers be denied their prescription medication. 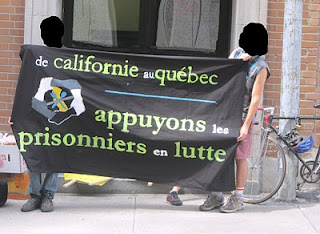 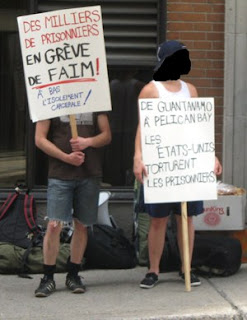 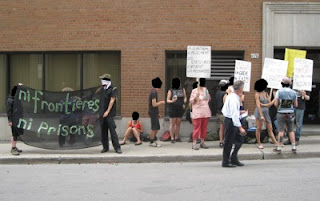 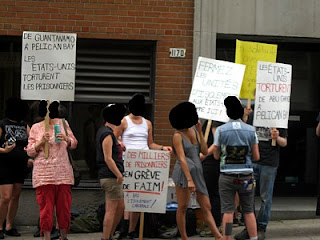 This is the second time this week folks in Montreal have taken to the streets to call attention to the struggle in California’s gulag archipelago. As reported on the sabotage media website, on Sunday, July 3rd, dozens of people staged a wandering noise demonstration, appearing first at Laval’s prison complex, which includes the Federal Training Center, Montée St-François Institution, Leclerc Institution, and the Canadian Immigration Prevention Center which holds immigrants whom are awaiting deportation and is operated as if it was a maximum-security penitentiary.

Bypassing the prison guards who attempted to block their way, the demonstrators held their banners up to the prison fence, shouting slogans such as “Our Passion For Freedom is Stronger Than Their Prisons” and shooting fireworks. The group then made its way to Bordeau men’s and Tanguay women’s detention center in Montreal, once again chanting, carrying banners and setting off fireworks.

Against the backdrop of Canada's impending prison boom, and with the example of mass incarceration south of the border, anti-prison activism is becoming an increasingly important site of struggle here. The solidarity actions with the Pelican Bay hungerstrikers build on this reality, and in turn inspire us to do more. 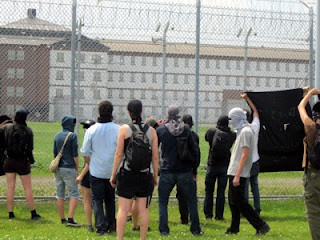 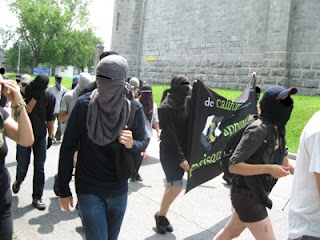 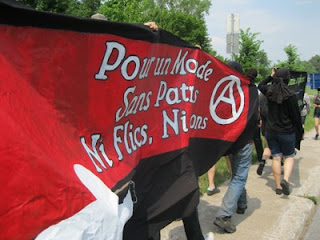 Posted by kersplebedeb at 7:01 PM

Email ThisBlogThis!Share to TwitterShare to FacebookShare to Pinterest
Labels: report