Demonstration in Solidarity with California Prisoners On Indefinite Hunger Strike 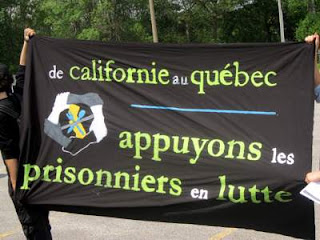 Canada is adopting the crime and punishment policies of the United States, the country with the world's highest incarceration rate, where over two million people live in prison, almost one hundred thousand of them in solitary confinement.

Between 2005 and 2012 the Correction Services Canada (CSC) budget will have doubled, as thousands of new cages are being built to accommodate a massive increase in the number of prisoners. Searching for the “best” ways to keep more and more people locked up, CSC officials have visited "supermax" prisons in the U.S. similar to Pelican Bay State Prison, where prisoners have been on hunger strike since July 1.

Canada already locks up Indigenous people and people of color out of all proportion to their numbers, and these trends will only be exacerbated by the government’s proposed crime bill. As First Nations, oppressed communities and poor people are all targeted by this ruling class attack, others will seek to make a quick buck off of this new expanded prison system. Architects, engineers, construction firms – not to mention the prison guards themselves – all stand to profit from the thousands of new prisoners.

At the same time, south of the border, scores of prisoners in California have been on hunger strike since July 1st. For years on end these men have been held in their cells, alone, 22½-24 hours per day, served unsanitary and unwholesome food, punished collectively for the actions of individuals, and routinely - and without reason - denied access to programs and amenities which are considered standard in similar facilities in other states and at the federal level.

This is why the hunger strikers are putting their lives on the line. As James Crowford and Mutop DuGuya from Pelican Bay State Prison explain, “No one wants to die. Yet under this current system of what amounts to intense torture, what choice do we have? If one is to die, it will be on our own terms.”

In solidarity with the California hunger strikers, and to signal our resistance to the prison system in Canada, we ask you to join us on July 16 as we demonstrate through the streets of Montreal, visiting the offices of companies involved in caging human beings here.

To find out more about this or other Montreal activities around the California prisoners’ hunger strike: